1928
The Canadian elevator and three grain warehouses were built at Aleiskaya station.
1932

Construction of the mill with the capacity of 150 ton per day in Aleisk. For 80 working years the enterprises has gone a successful way from launch to maturity. The company is still developing. 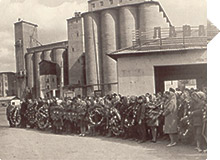 1941-1945
During the Great Patriotic War 112 employees out of 164 joined the army and 66 never came back. 189 thsd ton of wheat were sent to the frontline during the War.
1961
The enterprise starts using the combined feed plant with the capacity of 150 ton per day. The range of products is enriched with combined feeds and feed mixes for agricultural animals and poultry.
1992
The enterprise acquired the status of Open Joint Stock Company “Aleyskzernoprodukt” which allowed the company to boost modernization of the production and step up to the new level of quality.
1997

The plant for rye flour production is launched (milling plant no.3) and the division for grain production.

1998
Milling plant no.2 was launched on the equipment and following the technology of the Italian company «Braibanti Golfetto SpA» with the capacity of 430 ton of wheat daily.

2000
The premix division started working with the capacity of 48 ton of production daily, as well as the cereal flakes division and the line for grain and cereal packaging.
2002 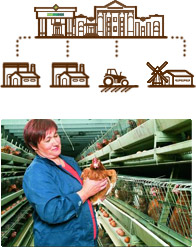 2003
On the 71st anniversary of the enterprise they launched the division for pasta production on the equipment and following the technology of the Italian company «PAVAN» with the capacity of 48 ton of pasta daily.
2004

“Aleyskzernoprodukt” becomes an agricultural holding – agricultural companies and affiliated enterprises are established. Their total field amount accounts for 42 thsd Ha. A year later a machine and tractor station was established.

Poultry plant “Komsomolskaya” (Altai Krai) was purchased. Its livestock accounts for 370 thsd, its reconstruction has started.

In August the combined feeds plant turned 50. The new lab equipment was installed for monitoring the amount of vitamins in premixes and mycotoxins in combined feeds for farm animals and poultry. The enterprise entered the market of Indonesia.

The third line of flour packaging was purchased which allowed to increase the production volume for customer-size package by 50% compared with 2009.

A warehouse for final goods was built and brought into operation. It’s 3000 square metres and meets all modern logistic requirements.

Grain-storage section no.7 was brought into operation, accounting for 16 thsd ton of grain to be stored at once.

A grain-separating tower was built and brought into operation. Its grain-dryer has the capacity of 35 ton per hour, brand “Melinvest”.

The place for loading combined feeds into modern grain cars with the enlarged carriage body was constructed.

The product range was enriched with the line of flour mixes for baking pancakes and griddlecakes.

The system of product safety management was introduced.

A new finished products warehouse for pasta was built.

Finished products warehouse no.4 was built and brought into operation.

CJSC “Aleyskzernoprodukt” named after S.N. Starovoitov celebrated its 85th anniversary. Prior to the anniversary another grain storage section of 25 thsd ton capacity had been brought into operation. Now the enterprise can store 95 thsd ton of grain at a time.

A new line for packaging flour into paper-bags of 5kg was brought into operation. 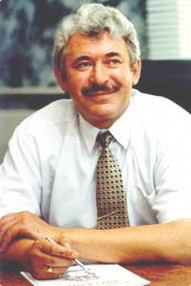 1983 — became the CEO of Aleisk industrial complex of milled and hulled products.

1992 — the industrial complex of milled and hulled products turns into JSC “Aleyskzernoprodukt” and Sergei Starovoitov is elected the CEO of the company.

Since 2002 CJSC “Aleyskzernoprodukt” has been named after Sergei N. Starovoitov. That is how the first CEO of the CJSC was memorized.